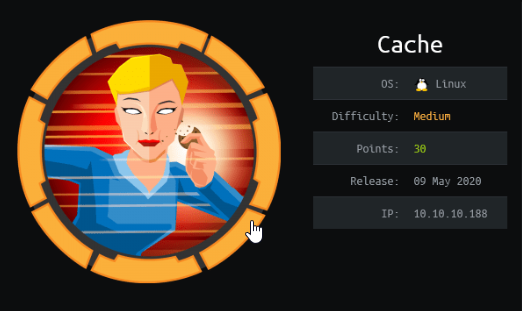 Hey hackers! This is Shreya Pohekar and today we are walking through Cache from hackthebox.

Cache is a medium Linux box. The initial foothold on the machine is based on a CVE of openemr which also requires a bit of enumeration to obtain creds. Escalating to the user is pretty simple as the creds to the user will be found at a very early stage. But there are 2 users on the box, each one having its importance. Escalation to root requires exploitation of docker with the help of the 2nd user who is also a member of the docker group.

With all that said, let’s get started!

Starting with the quick port scan, I found 3 open ports

In the results, I found this weird thing that SimpleHTTPServer is running on port 8000. After rigorous port scan on 8000, it turned out that the port is closed.(lol! False results generated by nmap)

Under author.html, ash seemed like a probable username. Also at the bottom, there was some hospital management system. [point noted]

Login.html landed up a page. Upon viewing its source code, there was a script functionality.js. It revealed the username and password to be ash and H@v3_fun

I used the credentials to login and got this page that was of no help. So that was the deadend.

I also ran a gobuster scan but that too didn’t actually help.

So wondering upon previously obtained knowledge, I realized that the hospital management system is the one I should have a look at. Similar to cache.htb, I made an entry to /etc/hosts specifying (since hms was author’s another project)

Upon googling I found that openemr is medical practice management software. And that 2018 OpenEmr described that the version of the software would be something that was released in 2018. And i found it to be 5.0.1

Alongside manual enumeration, I ran a few gobuster scans to retrieve any useful information.

With the help of gobuster results, I was able to verify the version of openemr

I searched for the available exploits for the version of openemr and found a few results. Authenticated RCE seemed promising but we needed some creds for the exploit to work. And the creds for ash were not working here(as he was not a valid user)

While searching for openemr exploits, I found a lot of sql injections possible even in the latest versions. So I spawned up sqlmap to find any creds. So I captured the request of http://hms.htb/portal/add_edit_event_user.php?eid=1 in burp and saved it in a file.

To list the tables in the database [there were 234 tables]

Dumping the contents of users_secure

Now that we have the creds, authenticated RCE can be performed. You can grab the exploit from here.

Do not forget to change the IP that corresponds to your attacking machine.

And I got a shell.

There were 2 users of which I had pass for ash, obtained earlier. I tried to su, but it was not a proper shell.

So I ran the following commands

So the user is pwned.

After enumerating with LinEnum.sh (can be found here), I found that there was docker running on the box

So i listed the contents of /etc/group to see if any user is member of docker group. And yes it was user luffy.

Therefore only luffy can execute the docker commands.

Since all the commands in docker require a sudo
Being the member of docker group means the user has password-less access to root. Now the goal was to retrieve the creds of the Luffy. So I again scrolled through the results of enumeration and found out that a port 11211 was active on telnet. And that’s where Memcached works.

If you are unaware of the term, let me explain a bit.

Memcached is basically an open source distributed memory caching system. It speeds up the loading of dynamic web application by reducing the load on the database. So this popular caching solution can be queried for any useful information.

We can communicate to memcached using telnet

In the output, the number after items: is the slab id (1 in my case). We can request a cache dump for each slab id, with a limit for the max number of keys to dump. This command is gonna output all the keys stored in memcached.

The value of the key can be obtained with get command.

> get passwd #retrieves any stored password (passwd is the key)

Since luffy is a member of docker group, running the above command directly priv esc to root.

-v : To bind mount a volume
–rm : Automatically remove the container when it exits
-it : Keep STDIN open even if not attached and Allocate a pseudo-TTY
chroot : changes the apparent root directory for the current running process ( here to /mnt)